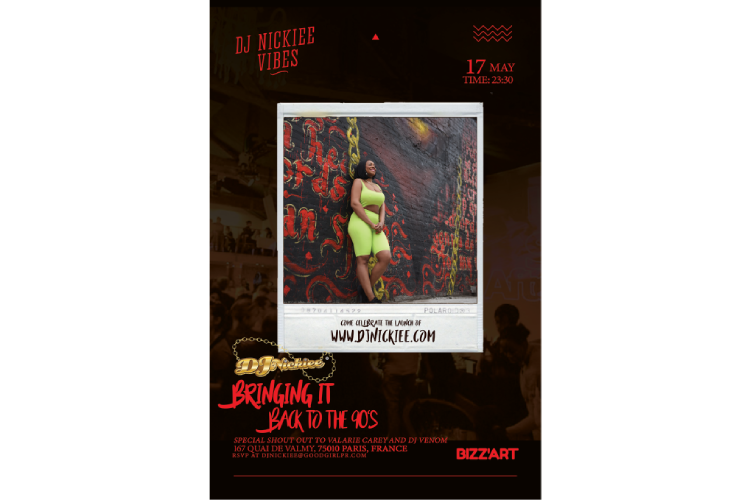 (May 8, 2019, New York, NY) On Friday, May 17, 2019, come celebrate the new website launch of “DJNickiee.com” with the Renaissance woman herself, Nickie Robinson, DJ, Founder of GoodGirlPR, Mom, Businesswoman, and overall brilliant creative. For the past ten years, Nickie also known as DJ Nickiee sacrificed her creative side to help empower and uplift her clients’ brands. Now that GoodGirlPR is a well-oiled machine and completely branded with a supportive staff, Nickie is now ready to spend a few nights a week to focus on her creative outlet – the art of Djing (mixing, scratching, beat juggling, and cutting). Fortunately, Nickie is able to combine her PR talent, massive email list, and social media following with her love of old school hip-hop to organize a night to remember for her website launch event at Club Bizz’art in Paris, France, which will be co-hosted by DJ Venom and Valarie Carey, who organized a large number of U.S. fans to attend.

To R.S.V.P for the Paris event, email DJNickiee@GoodGirlPR.com. Listen to her most recent mix on SoundCloud.

Raised in Los Angeles, California, DJ Nickiee excelled in the world of academia and graduated with a B.A. in Economics from New York University. She later received her Juris Doctorate from the University of Denver. With a music knowledge base that extends beyond her years, DJ Nickiee attended Michael Jackson and Rick James concerts since the age of three with her youthful mother whose vinyl and eight tracks inspired her ear for music. Her events attract hundreds of music, fashion, beauty, and art influencers. She has rocked clubs in New York, Los Angeles, and Europe and appeared in magazines and on television, exemplifying that she can rock any crowd. She has spun at special events for Essence Magazine, Capital Records, Bloomingdales, the New York Marathon, just to name a few, and toured with legendary hip-hop artist, Ghostface of the Wutang Clan.

GoodGirlPR is a full-service public relations and event planning firm based in New York, Washington DC, Atlanta, and Los Angeles. Public relations is a very competitive field, but GoodGirlPR is unlike other PR agencies. Because of the advanced degrees of our staff, GoodGirlPR is a collection of brilliant minds who think outside the box to execute successful PR campaigns which attract global media attention or resolve any crisis management issue. We understand the importance of communication and relationships with the intent of uplifting our client’s brand awareness and impacting their return on investment.